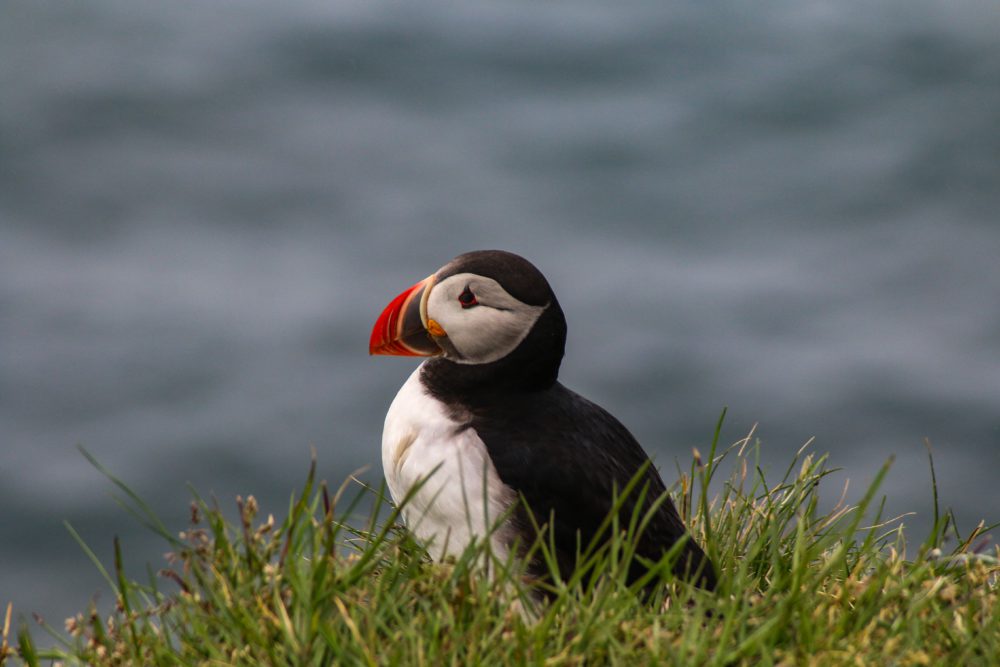 A species of seabird, the Atlantic puffin, is a popular attraction in Iceland. Iceland is home to over half of the world’s population of the peculiar birds. Puffins are versatile because they can fly, stand on land, swim on the surface of the water, and dive underwater to catch small fish. They are distinct-looking birds with a black crown and back, grey cheeks, and white chest. However, their bright orange legs and red and black beaks make them easy to spot. Males and females are generally identical, with males being slightly larger in size. They are usually about 30 cm in length and 20 cm tall when standing. Their small wings can beat up to 440 times per minute, making them enjoyable to watch fly. They spend much of their lives at sea, but nest during the warmer, summer months between April and September.

Puffins mate for life and raise only a single chick each summer. During the winters, they are solitary birds but reunite each summer. They reunite near their holes, which they burrow instead of making traditional tree nests. They enjoy burrowing on cliffs or between rocks to protect their eggs. They usually burrow around 90 cm (3 feet) deep and line their burrows with grass, seaweed, and feathers. Since they are small and clumsy, they tend to nest on islands where predators cannot reach them. Successful puffins can live for over 20 years. 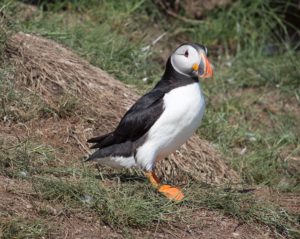 Puffin mothers and fathers take turns incubating their eggs for about 40 days. Once their chick hatches, they will then take turns bringing it to fish several times a day. Chicks leave their parents’ burrows after 45 days and then spend the next 3-5 years at sea. After 3-5 years, they will choose their lifelong mates.

These birds spend most of their lives at sea, where they rest on the water or dive under to feast on fish. Their webbed feet and peculiar wings make them great swimmers, but clumsy flyers. They flap their wings through the water and use their feet to steer as they dive up to 60 meters (200 feet) deep. They stay warm with their waterproof feathers as they float on the ocean’s surface.

Puffins often use body language to communicate with each other. Mated puffins who are reunited after the winter perform billing by rubbing their beaks together. When puffins are aggressive towards each other, they will puff their body and open their wings and beaks to look larger to their opponent. They will also stomp their feet to show their aggression, which has the possibility of escalating to a “puffin wrestling match” in which they interlock their beaks to fight.

Those looking to learn more about this exciting bird and get some great sightings can take part in the many Puffin Tours offered in Iceland. Most tours run May through August, which is prime nesting time. The tours give fanatics a chance to see Puffins interact with each other and nature in their natural habitat. The tours are careful not to disrupt the birds so that they will continue to make Iceland their home year after year.

Those who enjoy exploring on their own can find puffins without a tour guide as well. Puffin colonies can be found throughout the entire country, but there are certain areas that they tend to flock to in higher numbers.

Almost half of all Icelandic puffins nest on the Westman Islands. Here, puffins are both harvested and rescued. Young birds who have lost their path are rescued, often by local children, and returned safely to the sea at the end of each summer. It has become somewhat of a sport for local children to find lost puffin youngsters during the summertime.

The Westman Islands are a short ferry ride from Reykjavík, making it a great day trip for families and sight-seers.

The Látrabjarg Cliff is one of the three major cliffs in Iceland that puffins can easily be found. It is also known as one of the most famous cliffs in Iceland for birds of all types. A line of several cliffs, it offers beautiful terrain combined with the ease of finding puffins, making it a great spot for photographers. It is easily accessible by car and is in the westernmost point of Iceland. But be very careful when you walk there and be not to close to the see. Better safe than sorry! 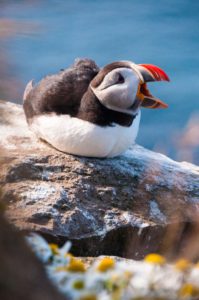 The puffins who call this nature reserve home are least frightened of humans, as they are not allowed to be caught or harvested there. Established in 1975, it preserves all vegetation and protects animals who live within it. The park can be accessed by a short ferry ride from either Ísafjörour or Bolungarvík.

Lundey Island, or “Puffin Island,” is an uninhabited island just off the coast of Reykjavík. Along with many other seabirds, puffins tend to enjoy the quiet, safe haven that this island has to offer. Many boat tours that provide puffin sightseeing to this peaceful island.

Puffins were first harvested by Iceland’s founders, the Vikings. Today, harvesting puffins has become a trademark for the country as it plays a significant role in its tourism industry. Puffins can be caught using a triangle net attached to a 6-meter pole. The puffins are then reduced to the breast muscles.

The Westman Islands is Iceland’s most significant area for harvested puffins. It is considered a delicacy that is found throughout the country. It is most commonly smoked but can be grilled or fried as well. They are usually served with brennivin sauce, gravy, or butter. Less commonly, yet traditionally, the puffin’s heart is also eaten raw.

Harvesting puffins has declined in recent years due to the decline in available puffins, fewer consumers eating them, and higher public alarm at the decline. The general public has recently become more aware of the fall of puffins and has scrutinized the hunting and harvesting of them. Populations of the bird have dropped up to 60% in some areas, causing activists to request legislation to protect them. There are currently many areas throughout Iceland where the birds are protected by nature preserves.

Article Name
Puffins in Iceland: When can I see puffins in Iceland?
Description
The Atlantic puffin is a popular attraction in Iceland. Iceland is home to over half of the world’s population of the peculiar birds